Kinnek is proud to serve over 120 breweries in New Jersey. This week, we’re featuring a trio of brewers making a difference for both their country and industry.

Torie Fisher is a busy brewer - not just because she’s making some of the finest brews in New Jersey, but she also happens to be an aviation veteran and full-time mom-to-boot. From her introduction to craft brewing in Wiesbaden, Germany, to launching a business proud to display its American credentials, Fisher’s tale is one of passion and many hats.

As one of only two women in her field of Army Aviation (a Blackhawk Helicopter Crew Chief) and a budding Cicerone, Torie is used to defying biases and industrial trends. Similarly, despite time spent serving far from home, her focus is on supplying something that speaks to the local crowd. Backward Flag is a brand that “everyone can rally behind," with a focus on “always moving forward and never retreating”. The result is an independent brewery with a mission to bring communities closer together. 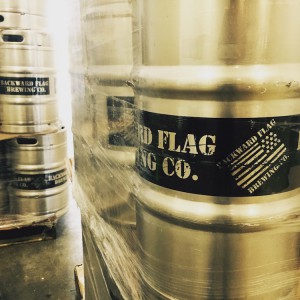 Backward Flag’s story began in 2007 with a partnership forged between Torie, her husband Charlie, and fellow veteran, Christopher Deangelo, who later became their business partner. The Fishers, both beer enthusiasts, decided to learn the art of brewing thanks to some help from a home brewer friend. However, when bottling day came, their initial results were disappointing. Rather than admit defeat, this spurred the Fishers to learn more about the craft, investing in books and equipment to refine their skills and offerings.

Two years ago, the couple started to investigate the possibility of opening their own brewpub. It felt like the right time to take their plans to the next level. Torie, motivated by a passion for fine gastronomic flavors, working with the community and a thirst for getting the most out of life, started to work nights at a local restaurant. In the meantime, Torie and her husband continued to work full-time and started a family. 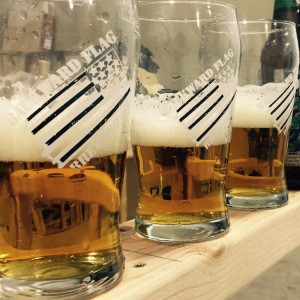 Nevertheless, thanks to some helpful guidance from ScoreOffice, satellite bureaus of the Small Business Association manned by business-savvy volunteers, Torie realised the economics of running her own restaurant would be prohibitive. It also meant less time interacting directly with the community, one of both Torie and her husbands' main motivations for brewing. With their retirement money invested in the business, the Fishers decided to raise capital for a micro brewery instead. This plan would enable them to continue working their day jobs while also growing their business in a scalable fashion.

That was when the Backward Flag team, with Charlie Fisher as head brewmaster, really began their journey into fermentation and all its complexities. The result was a bevvie of American-style beers that spoke to the couple’s patriotism and sense of community. Their goal is to “drive experiences" by creating moments centered around sharing a beer that can bring people together. As Torie puts it, “We’re raising the flag for American beer."

So far, Backward Flag has tested homespun brews such as “Stakeout beer” dedicated to law enforcement. The beer is an Imperial Cream Stout, brewed with coffee and conditioned with blueberries and cherries, the colours reminiscent of the lights on a police patrol car. Torie, who manages the design and branding side of the business, worked with a designer to get some labels made up and handed out the beer to local friends in the force. The messaging was “share this bottle with someone you can share your stories with.” Unsurprisingly, the beer was an instant success!

Nowadays, Torie pours back into her community through not only the brews, but also by providing counseling as a female entrepreneur and mentor for New Jersey residents and beyond. 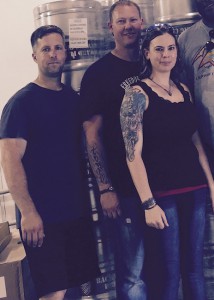 Backward Flag opened their tap-room, with sales conducted in-house, in September 2015. Thankfully, Kinnek was there to help Torie fulfill her goal. “The service is efficient - anytime there are any issues, it’s great to get a phone call from Kinnek. It’s a relationship, not just a business transaction.”

She’s even so bold as to say Kinnek “saved my life”. Coming from someone who’s been out in the field saving others, that’s one of the highest honors we can imagine. We’ll say an even bigger cheers as Backward Flag opens its doors to the public this fall. In the meantime, we’re proud to serve a company that's also serving their community and their country.

You can also contact them by sending an email to: backwardflagbrewing@gmail.com

Research and purchase equipment or supplies on Kinnek today. Subscribe to our blog to get the latest Kinnek news, too!