Kinnek Member Spotlight: Tim Koether is Putting Distilling Back on the NJ Map

Tim Koether knows a thing or two about New Jersey. That’s just as well, since the founder and owner of Claremont Distilled Spirits is at the helm of a small business trading both on the state’s appeal and notoriety. His small-batch artisanal moonshine, vodka and whiskeys are crafted to convey the spirit (both literally and figuratively) of liberty and prosperity. 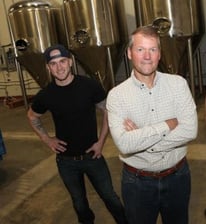 The distiller made the move from banking to small business after 20 years of rising early to commute into the city. Motivated by a desire to create something tangible with his time, Koether left his job in finance three years ago to pursue what he saw as a great business opportunity in the making. Spurred further by the revival of the local craft beverage industry, the aspiring business owner took advantage of a recent change in NJ law to promote distilling.

With a long-founded passion for Scotch and American whiskey, Koether decided the industry, with only 1% market share, was at a similar turning point to where the craft beer industry had been some 15 years ago. Craft beer now garners around 20% of the alcohol sales market share in the US.

Claremont Plants Its Roots in NJ

Working hard to obtain the necessary licenses, research locations and branding, Claremont Distilled Spirits made its home in Fairfield, NJ - within easy reach of not only New Jersey’s prime retail and hospitality hubs, but New York City's, as well.

A passionate advocate for local community and craftsmanship, Koether also seized the opportunity to tap into the “buy local” consumer trend. The proud state resident, who not only hails from NJ but has called it home for most of his life, wanted to capture the flavors of his home turf. In this case, he did that literally by creating a vodka made from one of the state’s biggest agricultural exports: the humble potato.

The Garden State is home to more than 9,071 farms covering 715,057 acres of farmland, which produce large quantities of potatoes and other fare such as blueberries and peaches (NJ is the US’ fourth largest producer of peaches). As a result, Koether and his team of master distillers experimented with different ingredients to see which would pair best with their products.

The potato was a hit, its buttery smoothness lending itself to an alcohol with a clean finish. Claremont Vodka is distilled the equivalent of 20 times through a dual reflux still. Vodka has to come off the still at 190% proof to be legally labelled as such. Just like any craft business, some attempts were not as successful. However, Koether found the sweet-spot with a new range of seasonal infused vodkas with local produce such as blueberries and peaches. The fruits pair well with the potato base and add a fragrant twist that works alone or in cocktails.

Claremont also produces an un-oaked whiskey, more familiarly known as Moonshine, which is an 80% proof spirit distilled from local corn. Just like vodka, whiskey comes off the still at 155% proof before being “polished down” to its double-distilled drinkable ABV. The “Jersey Devil Flaming Cinnamon” Moonshine is a reference to Pine Barrens legend the Jersey Devil, a mythical creature imbued with its own notoriety. Further whiskeys are in the works, requiring barrels and time.

Koether notes the odds are stacked against craft distillers when it comes to barrels, the popularity of oak barrels for whiskey and bourbon production constricting supply. Enter new cooperages, in this case Adirondack Barrel Cooperage, part of a new wave of craft cooperages looking to change shortfalls in traditional supplies. The boom in distilling and other craft beverages is thus providing ample opportunity for both craft customers and suppliers.

One of the few hiccups in this success story was when Claremont ran into problems sourcing bottles and heavy containers of yeast. When a screen-printing company known for its custom glass bottles produced low-quality results less than two weeks away from production, trouble loomed. Thankfully, Koether turned to Kinnek and its specialist suppliers. Solving for the immediate shortfall in branded bottles, the business initially sourced labels and corks from a vetted Kinnek supplier William R. Hill & Co.

The turnaround and quality of the product was so high that Koether now also sources bottles from the same supplier, which have proved popular with their hospitality customers and actually cheaper to source than their previous supplier. This connection also led them to another Kinnek supplier, screenprinter Stanpac. Similarly, Koether discovered East Coast yeast suppliers through Kinnek through Kinnek, which was helpful for his business and something he hadn’t looked into before. Without these last-minute connections made through Kinnek, the company’s business plan and production would have taken a hit.

Koether has also channeled his longstanding business expertise into areas such as capacity-planning, overheads and marketing. Capacity-planning was an important part of Claremont’s business plan: “We don’t want to do everything twice," Koether notes. He chose a 7000-sq. ft. warehouse to provide room to grow production from the outset.

After only 6 months of operation, the team was already working double-shifts to supply demand. To guarantee a quality-product, the owner, who began more as an aficionado than a distiller, invested in a team of local experts who were already skilled makers.

The versatility of Claremont Distilled Spirits, combined with strategic production, location, capacity and marketing, has ensured that only 1 month of production leads to its product being stocked in over 40 locations across the state. In addition, Claremont chooses to self-distribute and promote their brand thru in-person marketing pitches, word-of-mouth campaigns, and most importantly, by building relationships with local vendors and consumers at festivals and other industry events in the area.

For Claremont Distilled Spirits, working with local craftsman to produce their barrels and making connections with suppliers on Kinnek (amoung other things) has helped to ensure the business becomes a growing success story. With the US industry set to grow annually by 1% - some $12.4 billion p.a. - over the next five years according to IBIS World, it seems this ex-financer has made a very wise investment indeed.

Looking to grow your craft distilling operation? Visit Kinnek to get custom quotes on equipment & supplies from top suppliers for free! Subscribe to our blog to get the latest Kinnek news.
Topics: Kinnek, Distillery