Studying consumer purchasing behavior is a time-honored tradition for many consulting and market research firms, but studying small business buyer behavior is generally trickier due to decentralized and under-collected data across industries. Kinnek has a pretty unique look into this process, so we thought we’d take look at SMB buyer timelines. Here's what we found:

Once a buyer creates a quote request on Kinnek, how long does it typically take for that same buyer to purchase? Are buyers quick and decisive, or do they do a lot of recon before actually pulling the trigger and purchasing? 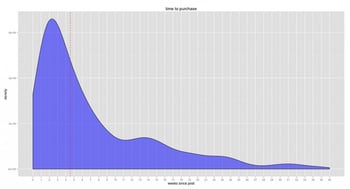 If we look across all purchases noted on Kinnek, we find a long-tailed distribution with a median time to purchase of 4.54 weeks. So, the median time from requesting a quote to noting the purchase on Kinnek is a little over a month.

Now, considering this is when Kinnek is actually notified of the purchase, there’s probably some inflation between the actual purchase time (which is tricky to define regardless) and when we officially record it. 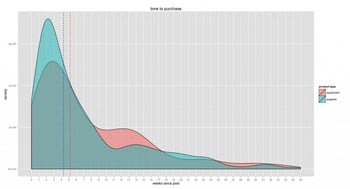 That seems like a pretty long time - so perhaps we're drawing this graph with too broad of a brush. A natural dichotomy one might consider is between between supplies and equipment. You probably wouldn’t think too hard about buying a frying pan, but you might do a little more shopping around before buying an entire oven.

That being said, we indeed found equipment to be more long-tailed, with equipment having a median time to purchase of 5.15 weeks versus supplies, which was only 4.28. Nevertheless, the difference is not as striking as we expected.

There’s got to be a good amount of variance somewhere, right? At least amoung different product groups? 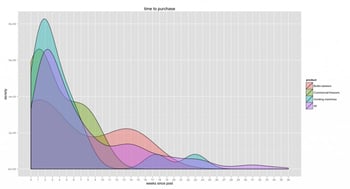 We took a look at products with larger sample sizes, and found that bottle labelers, vending machines, and commercial freezers were the quickest purchases, with median times-to-quote of 1.01, 1.28, and 2.78 weeks, respectively.

While bottle labelers are pretty strongly bimodal, the other two are strongly peaked earlier.

The first two make pretty decent sense - a good deal of feature specification (and money) have to go into purchasing either of one of those products, so it's expected to take a bit longer for a purchase to go through.

Nevertheless, tap handles taking a median time of almost 3 months to purchase is pretty interesting. Perhaps since they’re a luxury item, most buyers are just exploring the idea of purchasing one - or they end up with decision-paralysis from all the options available out there.

I guess the major takeaway is that the advice The Miracles first gave in their 1960 SMB purchasing manifesto is still heeded. Buyers don’t seem to be making any rash, 'I-need-a-knife-that-can cut-through-a-shoe'-type decisions at 3am but instead, they're shopping around.

Over 97% of purchases have messages between the buyer and the supplier, which are sent through Kinnek. In fact, the median number of these "buyer-supplier" messages is 5, which implies some type of negotiation/logistics process does, in fact, exist.

For a more in-depth look on the 'Buyer-Supplier Courtship', check out this blog post. Subscribe to our blog to get the latest Kinnek news.